If you have Mavericks and you do not have this wonderful Multiple Displays feature, do not worry because I know what you have to do!

But before that, let me blab about for a minute:
"Macs have supported simple-to-use multi-monitor displays since an era when they were unknown on PCs. Like, back when Macs were still predominantly black and white machines, when people wore suits with huge shoulder pads and big hair was all the rage. (I once had an SE/30 equipped with a video card that powered an external display.)

But when OS X Lion came out in 2011, Apple backslid when they introduced full-screen apps, which would cause one monitor to display a pattern while the other one held the app. And using Spaces since Lion - especially with multiple monitors - was an exercise in teeth-grinding frustration. Apple's changing that in Mavericks, making multiple displays finally work the way they're supposed to. And it looks like a lot of you are looking forward to it - based on our recent poll, more than half of respondents are enthusiastic about these improvements." (read on if curious: http://www.imore.com/os-x-mavericks-preview-multiple-displays)

What they did in Lion was good but not 100% because, for example, if you were trying to see a video (especially QuickTime and HMTL5) in full screen to one monitor, the other one went useless, showing some gray area. You know what I am talking about!

So, without getting into much discussion, the "enable fix":
Open "System Preferences", go to "Mission Control" and uncheck "Displays have seperate Spaces". 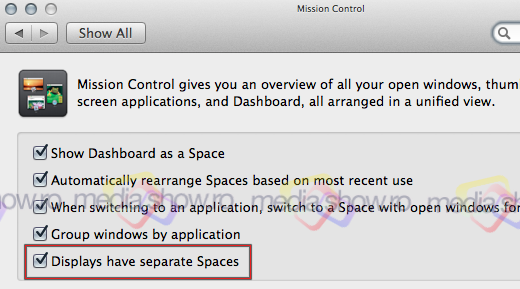 Thou shalt not steal!